The IENE Creativity Workshop was hired to perform, teach and inspire at the Applewild School in Fitchburg, MA this March 3rd, 4th and 5th, 2015.

Six of our personnel worked with 217 students from grades 4 – 8 and rubbed elbows with K – 3, the youngest of Applewild’s budding musicians, artists and scholars. On Tuesday at 11am  we unloaded and set up for our opening performance before the entire student body and faculty. Our set list was carefully chosen and crafted to reflect the school’s focus on the Harlem Renaissance. Included in our performance were Duke Ellington’s composition Jump for Joy, the title song from his musical of the same name (1939), Langston Hughes’ poem Dig and Be Dug, the gritty and poignant poem Satchmo by Melvin B. Tolson, and the traditional Negro spiritual Motherless Child.

Dig and Be Dug

Applewild sixth graders were split into two groups; musicians and artists, to be taught to create conversations between jazz and expressionist painting. 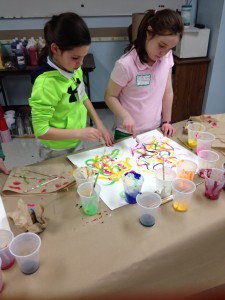 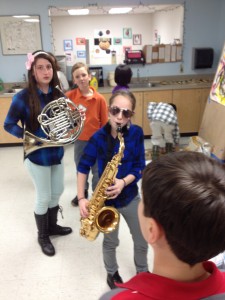 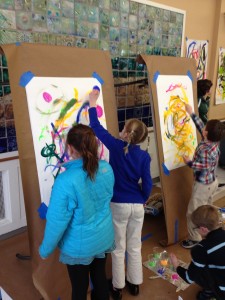 BY MELVIN B. TOLSON

King Oliver of New Orleans
has kicked the bucket, but he left behind
old Satchmo with his red-hot horn
to syncopate the heart and mind.
The honky-tonks in Storyville
have turned to ashes, have turned to dust,
but old Satchmo is still around
like Uncle Sam’s IN GOD WE TRUST.

Old Hip Cats,
when you sang and played the blues
the night Satchmo was born,
did you know hypodermic needles in Rome
couldn’t hoodoo him away from his horn?
Wyatt Earp’s legend, John Henry’s, too,
is a dare and a bet to old Satchmo
when his groovy blues put headlines in the news
from the Gold Coast to cold Moscow.

Old Satchmo’s
gravelly voice and tapping foot and crazy notes
set my soul on fire.
If I climbed
the seventy-seven steps of the Seventh
Heaven, Satchmo’s high C would carry me higher!
Are you hip to this, Harlem? Are you hip?
On Judgment Day, Gabriel will say
after he blows his horn:
“I’d be the greatest trumpeter in the Universe
if old Satchmo had never been born!” 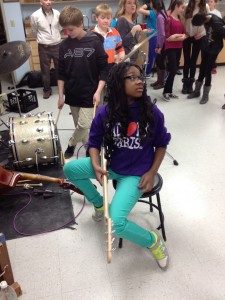 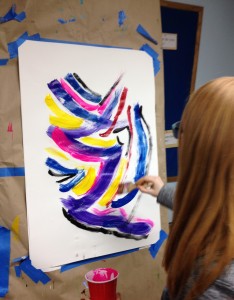 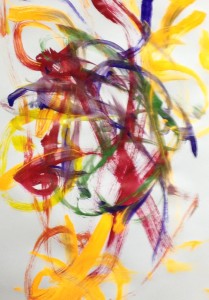