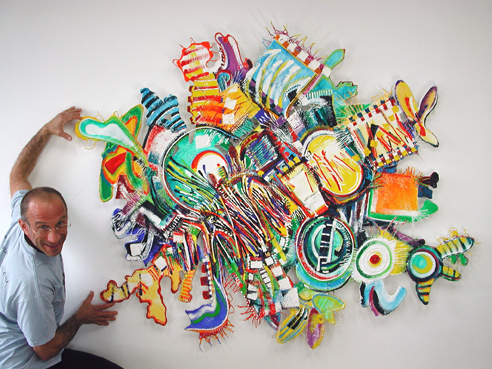 Roger Goldenberg has been praised in the news media as a “high quality abstract artist,” his paintings are “a close metaphor for the best jazz”…remarkable for their “expertly choreographed compositions.” During a Boston exhibition Roger Goldenberg’s paintings were chosen by the Boston Globe’s Calendar Choice as pick of the week! His abstract pieces are like “improvisational conversations in paint” that develop in his subconscious mind. Chris Millis, the former Living Arts Editor for Boston’s South End News and editor for artsMEDIA, exclaimed that “these are paintings you could ‘listen’ to forever.”

After viewing Roger Goldenberg’s solo exhibition at the AVA Gallery and Art Center, art critic and painter Robert Carsten described his students’ response to the exhibition; “They were so energized by your paintings during their work break they couldn’t stop talking about them. Roger,” he exclaimed, your artwork has the power to move people!”

Roger was awarded the U.S. Small Business Administration’s New Hampshire “Home-Based Business Champion of the Year” and was lauded by former Governor John Lynch at an awards ceremony sponsored by the NH Small Business Association.

His In Ears ‘n’ Eyes (IENE) performance ensemble and the In Ears ‘n’ Eyes Creativity Workshops (IENE-CW) are Goldenberg’s most recent artistic and teaching projects. The In Ears ‘n’ Eyes ensemble is a robust collaboration that creates in-the-moment conversations between his visual jazz painting and performing jazz musicians. Warren Seelig, renowned artist, art writer and educator, recently saw a concise version of IENE at the New Hampshire State Council on the Arts’ Arts In Education Conference. After the In Ears ‘n’ Eyes performance his enthusiasm for the spectacle could be seen in the sparkle of his eyes while he exclaimed, “Roger, I was truly impressed by the performance’s authenticity! You were all conversing with each other and your movements in paint were in direct response with what was going on musically. It was impressive!”

Roger is now on the New Hampshire State Council on the Arts Artist in Education Roster, which advertises his talents and creativity workshops to public schools and community organizations. Roger and Matt Langley brought IENE_CW to Portsmouth Middle School with 80 eighth graders as a part of her NHSCA AIR granted program, Vision, Verse and Verve: The Harlem Renaissance. IENE-CW just completed a creativity workshop at the Rye Elementary School in Rye, NH and has an upcoming workshop at Dover Middle School this May. IENE has worked throughout New England giving workshops that include the Applewild School, an ensemble of New England based executives and for the Saucony. In Ears ‘n’ Eyes was chosen to kick off the New Hampshire State Council on the Arts 2014 Arts In Education Conference.

Goldenberg recently moved to Lebanon, NH after maintaining a studio at the Button Factory in Portsmouth, NH for 20+ years. Roger’s studio is now in Lebanon’s AVA Gallery and Art Center on Bank Street. As an educator Roger has worked part-time at the University of New Hampshire while currently teaching watercolor, drawing and sculpture part-time at the Portsmouth Music and Art Center, Granite State College and Great Bay Community College.

What attention will his newest paintings attract?  Log on to ‘What’s New’ to find out!

For information about his current show click on ‘What’s New.’